Ring out the grief that saps the mind
For those that here we see no more;
Ring out the feud of rich and poor,
Ring in redress to all mankind.

Ring out a slowly dying cause,
And ancient forms of party strife;
Ring in the nobler modes of life,
With sweeter manners, purer laws.

Ring out the want, the care, the sin,
The faithless coldness of the times;
Ring out, ring out my mournful rhymes
But ring the fuller minstrel in.

Ring out false pride in place and blood,
The civic slander and the spite;
Ring in the love of truth and right,
Ring in the common love of good.

Ring in the valiant man and free,
The larger heart, the kindlier hand;
Ring out the darkness of the land,
Ring in the Christ that is to be.

Although Prince Albert was largely responsible for Tennyson’s appointment as Poet Laureate, Queen Victoria became an ardent admirer of Tennyson’s work, writing in her diary that she was “much soothed and pleased” by reading “In Memoriam A.H.H.” after Prince Albert’s death.

In 1889, Alfred Lord Tennyson stayed with the historian James Froude at his home in Devon, which overlooked the Salcombe estuary. And it was here, in a garden summerhouse with a serene sea view, that Tennyson is said to have written his final poem “Crossing the Bar.” In Salcombe, the “bar” is the Salcombe sandbank, which at low tide becomes partially exposed, thus presenting a danger to shipping. 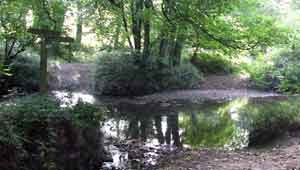